Days that start with "dbl-u" / Haydn the fog

I thought about it, quite hard, yes, as I gazed into the semi-darkness of my coffee cup. I even looked at other weeks on the calendar, but the only match I could find, or that was close at least, was "Wednesday". "Try harder, I thought, "look at last month, or even 2006 and 2007". But where would that get me? Only into more trouble. So there. Today happens to be Wednesday, the day I carry my garbage out (at night) to dump it in the neighbors' bins. As such, Wed. is a very important day on the calendar.

Haydn? Where is he? Hard to tell in this fog... I guess he's hidin' in it. So well I cannot hear his music (I can't even see the ocean 40 yards away). Which is why I have Paul Weller playin on the hifi - an album from the days of the Fondation des Etats Unis back in early 90's Paris. "Wild Wood": good stuff, reminds me of Van Morrison or Steve Winwood. 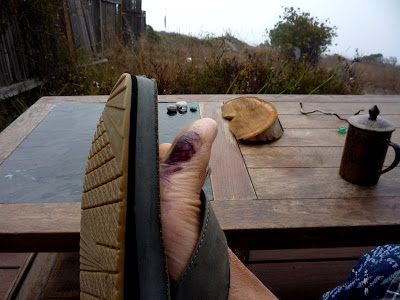 (Stubbed toe? No sir, no m'am, I stepped on a blackberry while picking some. Same looks but no pain. Click photo above for slideshow of morning fog - then hit F11 for full screen. Bonus shots include hanging artwork from the artist and his buddies)
2 comments:

Rummaging thru a few still un-emptied suitcases I find this jacket Jen gave me last May. I put it on. Feels nice and cozy. Harada Roshi, a zen master, is coming to town on Sunday. I’m listening to an old Fugees LP on the lower deck outside while writing on my laptop - niggaz on mah deck. I finally have phone service. EDD has declined my claim for unemployment money. They were my only sponsor for my projects*. Trivia in the eYe of mother nature? Yes, probably. Other than that there is nothing going on besides the Great O.p. and its rolling waves below. "Nothing happens by the sea", Chris Rea sang - a long time ago. 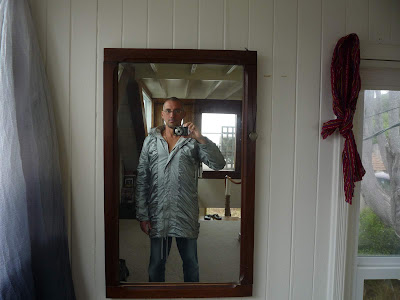 (Click "Jenz Coat" above - a sort of tribute to Andrew Wyeth's "Ghost" - for slideshow, then hit F11 for full-screen)
And speaking of eYe, this blog has may have become the journal of my Bolinas chapter. But I still want to keep it down to low text / mostly photography.

After I wrote this Jannick, my new French friend from Bo. came over for tea. Then the sun came out and it is nice again. So I'm off to grab a wetsuit Jannick's lets me borrow and get a few good strokes in the ocean. Maybe some boogie board too.

*Among others, see Homegrown Muthaz of the Great O.p.
No comments:

Sylvie and Laurent drove up from San Franciso on Saturday and got lost a few times on the way. They forgot to get off at the Stinson Beach exit on 101. Then on their way down from Olema they missed the turn from 1 to Bolinas. Anyone would have. But they made it. 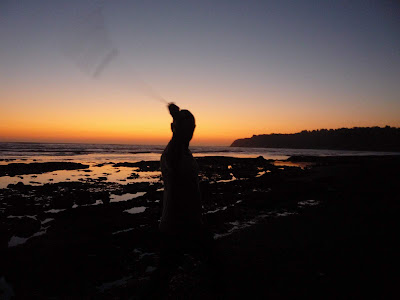 That night after a walk to Agate Beach and dinner, they slept on their air mattress on the porch, under the milky way.

Otherwise, not a whole lot going on today. The sky is gray. Scott, the plumber is in the house fixing a defective shower (hot water takes about 5 minutes to arrive, then only lasts 3 minutes!). I took a swim in the neighbor's pool. According to Paul, my landlord, anyone who lives in Bolinas is welcome to walk in and take a swim. Great spirit!
No comments:

Lately I’ve been obsessed with form. Not any particular form. Just a sense of visual balance. Tonight I was thinking of “form is empty of form”. I recalled that this was a line of the Heart Sutra - The Great Mother Prajnaparamita. But just to be sure, I decided to google Heart Sutra to get the exact phrase. Then I remembered: I don’t have internet here. Luckily, I had the original text upstairs on a shelf. But then I realized I did not have to go get it because I knew the sutra (almost) by… heart (in fact I get mixed up when Avalokiteshvara starts listing all these things...).

Well, in fact the sutra says something else: “form is emptiness, emptiness is also form”.

So what to make of “form is empty of form”? Where did that come from? Did I make it up? I doubt it. Probably sumthin’ floatin’ ‘round that ol’ mindstream o’ mine. So at this point the best thing to do would be to just look at the goddam text. Surrender to the source. But no, I was sure in my guts that “form is empty of form” was not in that Sutra. It was somewhere else.

While I write this, behind me, inside of Smiley's Saloon, someone is blasting ACDC's Hell Bells. 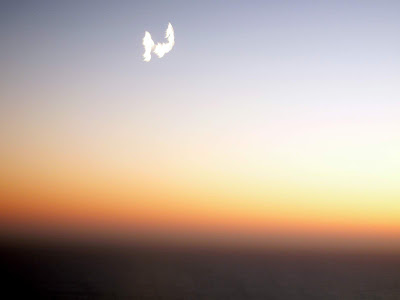 (Click "Shaky Moon" above to see more pictures, then hit F11 for full-screen)
No comments:

life's a series of WOWs

yes siree. and that's why today I'm dedicating this post to my dad who used to tell me "life's series of nows" (and he was right!) and to the kind Lisa Castillo who sent me this cool card (shown below and on slideshow, with Duxberry Reef in background) to welcome me to my new digs in Bolinas. I wonder if life is a series of vows, too :) 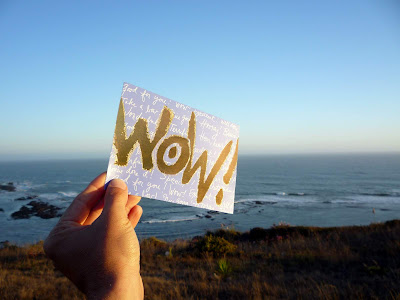 (Click "Wow" photo above to start slideshow, then hit F11 for full-screen)
No comments:

last night, when I officially moved into the house in Bolinas - I pulled the stereo out on the deck. I had a candle on a table I found in the Presidio
and far west, out by Point Reyes, I watched that red sliver of a moon
set
into the Great Ocean Pacific


I had Pat's album with Brad Meldhau
cool 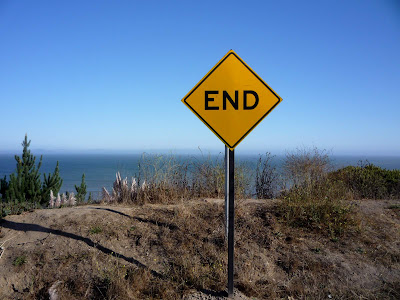 (Click "End" photo above to start slideshow, then hit F11 for full-screen)
drive to SF was a breeze, no cars, just the great ocean on my right
the drive back was an experience to be filed somewhere between "Guns for the Eldery", published by The National Enquirer in 1979, and a movie starring Marty Feldman and his real life twin, Gus, as two super-competitive life coaches living in Marin

"ah put mah thumb up yo ass" was one of the things I did not think of,
oddly enough

(no I didn’t ask for her number, but I was tempted)

at one point I took someone else's cart by miSTake
an attractive blonde, a bit Russian looking
right: that's how I ended up with a bag of parsnips!
didn't even now TJ's sold any

then Cars everywhere! and Houses everywhere not an inch of sand or grass or tree not sticking out of
Cement
Like a crow in the fog
Clement street dim sum hell

And then driving back - ahem, crawling - in the little Civic - up the coast, just past Muir Beach
a very in a hurry Volvo Wagon up my ass

The whole journey to SF thing just made me sympathize with people like
my dad who, after leaving a cozy bed in nice quiet morning apple blossom
(Another planet, incomprehensible divide)
places like, say an old house in North Eastern Pennsylvania, think they’ve fallen down the rabbit whole as they start hitting the NY Thruway or the Long Island Expressway.

Last June, my pops had to drive 3 hours to pick up his son at fucking JFK at, that’s right, rush hour - and I am really grateful to him

Just not something folks really want to deal with

So while I was out on the deck
watching the moon I realized I was seeing it as I had never seen it before, or maybe on one or two occasions
Not the sun going Down
But the moon, also, leaving even before the night had arrived
And leaving us with
What?
A moonless night
yes
But what an exit she made

Then after she, the moon, went her way,
I struggled
yes I do that too, more often then not
istruggd (new word, kinda Norwegian looking) between cooking or writing
And when that subsided
I ended up with this:

sprinkle with large qty. of shredded nori
layer with a fine coat of alfalfa
And bring it home with a topping of fresh California fig
Settle for no less!

A mesmerizing dance
Of watermelon sunshine
No comments: